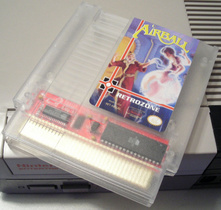 Available for sale at RetroZone is a first for Nintendo Entertainment System enthusiasts, a mass-produced cartridge of a previously-unreleased title, Airball.

Originally a computer game published by the relatively obscure and long-defunct MicroDeal (my personal favorite title of the company’s being Cuthbert Goes Walkabout), the NES version of Airball was being ported for publishing outlaw Tengen in the 90s, just in time for system sales to be completely destroyed by the new 16-bit consoles.

The developer behind this particular port was none other than Novotrade, which was primarily a port house at the time - in fact, its only other documented NES development is Impossible Mission II. Novotrade eventually found their shining star with a time-traveling dolphin named Ecco, changed names to Appaloosa Interactive, developed one of my personal favorite B-games, Jaws Unleashed, and then kind of disappeared…does anyone know if the company’s still around?

The game itself is a pseudo-3D isometric fetch-quest, along the lines of Knight Lore, Alien 8, Batman and the like (or, if you’re only console literate, Solstice on the NES). As the NES-exclusive opening cinema shows, an evil wizard has turned the player’s human character into a ball, and sets him on a journey around his castle to find a handful of items he’s misplaced. The catch, though, is that the ball has a slow air leak, and will turn into a useless, immobile pile of rubber when it runs out. The player must balance his or her efforts between locating scattered air pumps to stay mobile, dodging all sorts of pointy things that the castle seems to be entirely constructed out of, and locating the wizard’s crap, the actual locating usually being only half of the puzzle with the rest consisting of tricky jumps, item manipulation, and luck.

Novotrade’s port shows a lot of loving care, with thought put into making a notoriously difficult computer game accessible to a console audience. Exclusive to this version are Easy and Normal modes, which tone down the amount of damage the ball can handle, eliminate the danger of over-inflation on the air pumps, and rearrange the quest items to much more easily-accessible rooms. Hard mode is an accurate recreation of the original computer game, which makes the quest longer and more dangerous with one-hit kills and entire castle wings that are unnecessary to visit at lower difficulties.

Other new touches include an original soundtrack, awesomely crappy voice samples for the wizard’s dialog, the ball’s ability to automatically shift to the nearest “track” when the player stands still (very handy when exact placement is necessary to avoid death), and both opening and closing cinemas.

The physical product, currently at $35 USD, comes in a custom-made clear plastic shell, and includes a glossy label, manual, and even a box! The ever-vigilant NES World has an extensive review that includes new images and video, for those curious. There’s also a game solution available at GameFAQs which is, to my knowledge, the first walkthrough to appear online for any variation of this game.