Elusions focuses on unpublished games that have yet to be tracked down, either by outside hobbyists or ourselves. This month, Lost Levels tries to uncover the fate of two "lost" Squaresoft games that both have rather famous names: Final Fantasy IV for the Nintendo Famicom and Seiken Densetsu for the Famicom Disk System.

By 1990, Final Fantasy had spun off two successful sequels in Japan, and a North American release of the first installment had also seen good sales. The company was already looking ahead towards producing another Final Fantasy game for the Famicom as well as a new title for the recently launched 16-bit Super Famicom game console.

Squaresoft apparently planned to release Final Fantasy IV for the Famicom and then Final Fantasy V for Super Famicom, both in 1991. The company was not as large back then as it is today, however. Seeing their resources stretched too thin, Squaresoft decided to cancel the Famicom project and focus solely on their next-generation installment.

Final Fantasy V for the Super Famicom was renamed to Final Fantasy IV and released to much critical acclaim in 1991.

Were it not for a recently unearthed Japanese magazine preview, the original Final Fantasy IV might have vanished into the annals of history. The article features an exclusive preview of Final Fantasy IV for the Famicom.

"The popular job class is back, with even more classes," the article proclaims. "Magician, Priest, Cook and Carpenter, among other jobs, make an appearance; expect the unexpected." 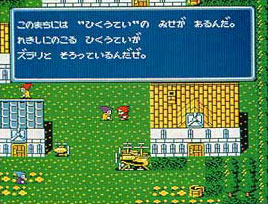 The preview, which also features some rather tongue-in-cheek predictions courtesy of Square's rivals at Namco and Enix, is highlighted by the only known screenshot of the game. In it, our nameless hero is told from an old man in a village that "there is an airship shop in this town. An array of surviving airships from the past are there."

But perhaps the article is just as speculative as the goofy comments made by Enix and Namco. Kaoru Moriyama, a former public relations publicist and translator for Squaresoft, says that the game never made it far into development.

ōThe [screenshot] is made-up,ö says Moriyama, who worked for Squaresoft from 1990 to 1993. ōIt's not even a preview, it was just a 'presuming what [the] next Final Fantasy will be like' type of article.ö

Creating conceptual "mock-ups" of how a game will look once it is completed is nothing unusual in the video game industry, and Moriyama says Squaresoft often made screenshots like the one in this article. Sometimes magazine editors themselves would create their own mock-ups.

Moriyama doesn't remember the exact origins of this particular picture, but she is confident that it is not from any actual game. Moriyama says buying airships ōwasn't in our plan at all.ö

The decision to change Final Fantasy IV from a Famicom game to a Super Famicom game came early on. No actual coding for the game was done, Moriyama says. ōIt was only on paperwork.ö

Turn back the time machine to a few years earlier, and we'll see another game at Squaresoft meeting a similar fate. Seiken Densetsu, released on the Game Boy in North America in 1991 as Final Fantasy Adventure, began as an ambitious project for the Famicom Disk System (FDS) in 1987.

The FDS was a system accessory for the Famicom that enabled users to play games on rewriteable diskettes that were less costly than the normal cartridge-based Famicom games.

Advertisements for this game suggest that it was to be an unprecedented 5-disk role playing epic. Had it been completed, the game would have been one of the largest ever made for Nintendo's 8-bit system.

While rumors abound of former Squaresoft employees owning prototypes of this game as well as Final Fantasy IV, Moriyama again states that no real progress was ever made.

ōThe name was trademarked at an early stage, but never developed actually,ö Moriyama explains. ōSeiken Densetsu for the Disk System only existed on a 'planning sheet.'ö

As Squaresoft began focusing on development for the fledgling Game Boy handheld system, resources for the Disk System dried up. ōA 5-volume saga was too big of a plan,ö says Moriyama, ōand it was never supported among the top management. So it got cancelled in the beginning of development.ö

Square did not want to lose its trademark name, however. ōThe trademarked name was reused for a not-so-focused (at that time) title, which was developed by a team of newbies in the department.ö

The game, which was originally titled Gemma Knights, became the Seiken Densetsu game that was eventually released for Game Boy in 1991.

Still, if Square had done next to nothing with their Famicom Disk System project, why would they have begun advertising the game? A letter from Squaresoft that's dated October 1987 was sent out to people who actually were able to pre-order Seiken Densetsu for the FDS. In it, the writer apologizes for the delays.

"In the middle of December," the letter goes on to say, "a game will be released with the same gist of Seiken Densetsu (an RPG with a 4-character party) for 5,900 yen. Those who have reserved Seiken Densetsu will have their reserve fee refunded ... If you would like, by all means, please take this chance to reserve Final Fantasy!"

It would seem incredibly short-sighted for a company to openly advertise a game, even going so far as to allow people to reserve copies of it, if it isn't even off the drawing board! Moriyama sheds some light on this issue:

ōWe were a small, very small company, and we were short-sighted about lots of things back then,ö she says. ōAnd pre-orders did happen like that back then in Japan.ö

So little work was done on the original Seiken Densetsu that one time when Moriyama asked the original project leader, Kazuhiko Aoki, what the game was about, he told her that he had completely forgotten!

I may be a Square fanboy at heart, so it saddens me that there probably is no "lost" Final Fantasy or Seiken Densetsu game locked away in somebody's attic somewhere. However, it really is not all that uncommon for game ideas to be conceived and then dropped at a very early stage in development. These two games just had the unusual fortune of receiving some publicity before their inevitable demise.

While it seems that no work was ever done for Final Fantasy IV Famicom and Seiken Densetsu FDS, there's always the possibility that other Squaresoft games came close to completion before they too, were canceled. Perhaps even an unreleased English translation for one of their flagship titles?

In the video game industry, anything is possible.

Some of the information presented in this article came from this Japanese web site. Special thanks to Kaoru Moriyama, Skrybe and BugCatcher.