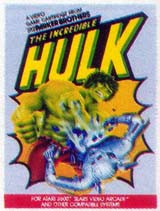 Every month, Elusions focuses on an unpublished game that has yet to be tracked down, either by an outside hobbyist or ourselves. This month, to tie in with the recent movie release, we’ll be discussing Parker Brothers’ The Incredible Hulk for the Atari 2600.

“In this video game, you’re Bruce Banner – alias THE INCREDIBLE HULK. Bizzare [sic.] city creatures have captured his girlfriend, Betty, and you must rescue her!”

A 1983 supplemental video game catalog by Parker Brothers is all the evidence we have of The Incredible Hulk’s existence. The advertisement shows a rather vague screenshot, followed by a crudely written blurb that hopes to explain to us what we’re seeing.

“Dash through a maze of ever-moving streets and buildings in this unique tri-level metropolis. Climb ropes or jump down open manholes to reach different levels. Pick up gamma charges along the way and become THE INCREDIBLE HULK whenever these city creatures attack.” 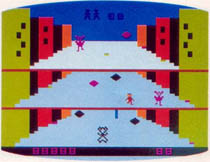 A close inspection of the included screenshot reveals most of these aspects. The game did, indeed, appear take place in a rather unique “tri-level metropolis.” Three bizarre creatures are clearly visible, though it’s easy to interpret most Atari graphics as being both bizarre and creature-like. Sprites that could be easily seen as manholes and ladders are located on the central and bottom levels.

And near the middle of the screen, appearing to take a weary step away from an enemy, stands a sprite that must be Bruce Banner himself.

“Save Betty, and find the antidote that will rid Bruce Banner of this terrible curse – before it’s too late!”

One wonders if Bruce Banner’s terrible curse is that of entering the video game world too late to be profitable. A Parker Brothers parts sheet numbers the game as PB5940, at the very bottom of a mostly chronological list. A crucial point, considering the oncoming crash.

Thanks to various bad decisions, fly-by-night companies, and far too many additional theories for us to list here, the video game market was on its last legs by the time The Incredible Hulk would have been seen on store shelves. The world was about to experience what is commonly referred to as The Video Game Crash, a dry spell in American video gaming that would not recover until the Nintendo Entertainment System took the world by storm starting in Christmas of 1985. This was likely the cause of its cancellation.

But is the game out there? And if not, had it ever been at all?

Leonard Herman, author of Phoenix: The Fall and Rise of Video Games, confirms that The Incredible Hulk was not displayed at the 1983 Consumer Electronics Show. As of this writing, we know of no one claiming to have seen this game in action. Nearly every one of the Parker Brothers programmers of the time have been asked about the game by hobbyists and journalists alike, and all of them deny having taken part in the project.

“I’m ninety-five percent certain it’s out there. I think it was completed. All evidence seems to say it was.”

The evidence, according to Reichert, is based on a past history of unreleased Parker Brothers games. Nearly every unpublished game by the company has, to date, been found by private collectors, often more than once.

Although Reichert tells us that the aforementioned catalog screenshot is merely conceptual art work, and not an actual game screen, he feels that the relatively detailed description of game play is enough to suggest that the game was, at the very least, worked on. Additionally, says Reichert, Parker Brothers advertised The Incredible Hulk rather heavily in magazines, including mention of an equally-mysterious Intellivision version.

And then there’s the box.

In 2001, a mock-up box of The Incredible Hulk for the Atari 2600 appeared on eBay, where it was snatched up by a Hulk collector. The box itself offers no additional clues to the mystery behind the game, though its very existence is strong evidence for the game having at least been in development at one point. It is very unlikely that Parker Brothers would go through the trouble of advertising a game in various media and producing a prototype box without an actual product.

“By my guess, the game will turn up within a year,” says Reichert.

"Unfortunately, wishing for the game to exist will not make it so. The game does not exist even in prototype form. I wish it were otherwise as any 2600 fan would, but it does not. My opinion is as much speculation as any others' opinion is, but it IS based on at least SOME facts: we've spoken with several past Parker Bros.' designers and not a one was involved in, nor knows of any development with this game, despite the fact that they were involved in Atari 2600 development efforts at the time this game was being promoted."

One wonders if The Incredible Hulk, having dealt with various colorful monsters, guys in tights, and whatever else Jack Kirby threw at him, could have prevented the video game crash with an appearance on the Atari 2600. We’d like to think the game would have revolutionized a dying hobby, changing the face of gaming as we know it.

But we doubt it.

So, as always, here’s to the hunt, and to hoping it’s not too late to cure Mr. Banner of his terrible curse.