A Short Interview with Neil Gaiman 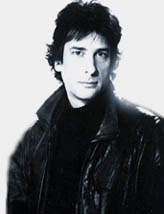 I didn’t go to the San Diego Comic Con looking for Lost Levels material. I went to see Neil Gaiman. My one and only goal was to buy the man a drink and discuss the writing process with him.

Naturally, not having much interest in the rest of the convention, I attended all of Neil’s panel discussions. One of the first to be staged was a screening of A Short Film about John Bolton, which served as a sort of practice run for Gaiman’s eventual big-screen direction of Death: The High Cost of Living.

A short question and answer session followed the film. One fan inquired as to why Gaiman, having told stories in nearly every possible medium, had yet to write a video game. Gaiman replied that he actually had been involved in writing several video games, but every single one of them was cancelled.

Could it be that a personal hero of mine is also interview material for my magazine?

Having approximately one hour until Gaiman was to attend a get-together at a small Irish pub for the Comic Book Legal Defense Fund, I ran outside and approached the first bicycle cab in sight.

“Journalistic emergency. I need to purchase a tape recorder and then arrive at Dublin Square within one hour. I have money.”

One hour, sixty dollars, some persistence, some intimidation, and about four Newcastles later, I was finally able to schedule a five-minute interview in Gaiman’s hectic schedule on Sunday evening.

And so it was that I interviewed New York Times bestselling author Neil Gaiman on a very unlikely subject matter. Our session was rushed, we were plagued with distractions, but I managed to come out of it with some rather interesting developments. Enjoy.

Frank Cifaldi: All right, I apologize for the, ah, “lack of forewarning” on the subject matter here...

Neil Gaiman: Not a problem!

FC: I was at your screening of your directorial debut, A Short Film about John Bolton? Someone asked you why you’d never been involved in video games or any interactive media. You mentioned several cancelled projects, I was actually looking for some elaboration on that.

NG: Let’s see...the first one I remember being involved with...there were several Sandman games going back to the days of CD-ROM. There was a company called Inscape. We plotted out this huge, elaborate Sandman game, which has never happened.

FC: So you plotted that yourself? You actually wrote it?

NG: We were working with a bunch of people from the company. Um...there was an Alice Cooper game to go along with Last Temptation, I think it was Electronic Arts, and we put together the whole shape of that, working with a computer lady named Cindy Baron. And that, again, it didn’t go to Electronic Arts, it went to somebody else, and then it just...vanished. More recently, there was a whole, huge...when the web happened, there was a bunch of online, interactive things which started, and then interactive web companies went the way of the dodo and the passenger pigeon, and after a while I sort of started getting to the point where it didn’t even seem to be worth putting the little bits of effort in because the probability was the company would go tits up.

FC: So have you given up on it for now, or would you accept another offer?

NG: Um, well, it’s more a matter of the time. Oh, hang on, that isn’t a real signature, is it? That’s some of peculiar facsimile.

NG: They’re...they’re stamped signatures! I’ve never seen them! I wonder who...I thought for a moment they were my signature, and then I saw that they were the same on each – sorry about this – they’re strange and mysterious. There you go!

NG: You are very welcome!

FC: So did anything get beyond, like, a plotting stage?

NG: Um, the Alice Cooper one was plotted in detail. I mean that was, you know, sort of beat-by-beat. I’d done some outlines for some online stuff. Quicksilver were working on a game that I...sort of a story that I created, an interactive story. They, I think, did a whole presentation on it, and, um...

FC: So nothing terribly close to production.

NG: Nothing ever got close to production, because everyone would go out of business first, or give up, or whatever, and I would always be busy with movies and books and comics, so I never really got to that point of, ‘Okay, let’s...’ I mean, the closest thing that ever came to happening was Dave [McKean’s] Mr. Punch game CD-ROM project, where it was all filmed and scripted and all done, and I believe it’s still sitting up in somebody’s attic, because again the company that was going to fund it, and a project of Dave’s called Mirror, um, just died. So we had an entire Mr. Punch thing. Dave showed me a lot of footage from it, and it was quite gorgeous. It probably would have revolutionized the world of online...stuff.

FC: Do you know who that was with? Which company?

NG: No, Dave would remember.

NG: It’s embarrassing, but true. I don’t pay as much attention to this stuff as I should. It goes in and goes out.

NG: It would depend a lot on time! It’s sort of like people saying, ‘Well, would you write a movie?’ And yeah, I’d write a movie, but I only have so much time. So I um...you know. But yes I’d do another video game, or another CD-ROM game.

(Neil turns to Dave McKean, who has been sitting by us the entire time, talking to fans)

NG: The Mr. Punch CD-ROM project, those people that went out of business or...

NG: I wish it was colder, I would put it on under my leather jacket.

(McKean gets up to leave)

NG: Well, I think it’s a fascinating...I’m very, very fond of video games and the whole video world. It’s just, I started feeling like some kind of evil Jonah. (laughter) I, you know, things would happen, and they’d be really brilliant, and they would go down. And they would go down kicking and screaming, and I would get phone calls. And it was always before they’d ever handed over any money.

NG: I mean, that was bizarre. You know, you’d negotiate for six months, and you’d be at the day of contract signing, and you’d get the phone call saying, ‘I’m sorry, the moving trucks have come, and they’ve taken everything away.’ (laughter) The only thing I ever got out of anything was a computer, which came in from, I think it was Den TV? Den TV...one of the online things.

NG: And the day they went bankrupt, they sent me their computer.

FC: And, really quick, what are some of your favorite video game projects? Any inspirations?

NG: My favorites tend to be really, really old ones! My favorite all-time computer game, and video game of any description, is the original text-based Hitchhiker’s [Guide to the Galaxy] game.

NG: I mean that, as far as I’m concerned, had the best graphics of ANYTHING I’d ever seen, because I did it all in my head. (laughter) And it’s the only game I’d ever played that I would wake up having dreamed solutions to things, that I would then go and try, and sometimes they’d work! So that, of all of them, I still think that was the best, because the story was the best! And it was the one place the story just completely interacted with what you were doing, and it felt wonderful.

FC: All right, everyone’s staring at us, so...thanks a lot, Neil!

NG: You are very welcome.

Neil Gaiman is an underrated cult hero, and may very well be the last surviving bard in the world. Gaiman’s told stories in nearly every form, be it comic books, children’s books, novels, television productions, or movies. His latest book, The Wolves in the Walls, is available now in the children’s section of any bookstore worth its gravel.

Frank Cifaldi is a fanboy at heart, and still owes Mr. Gaiman a drink, whether he wants the damned thing or not.